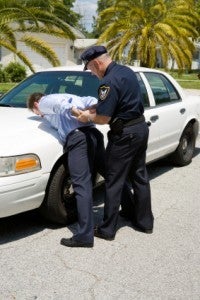 Unlike resisting arrest under Penal Code §148(a)(1), however, PC §69 requires actual violence, or a threat of violence. In that respect, it is similar to Penal Code §240 assault.

However, because Penal Code §69 is designed to protect government employees such as judges and law enforcement officers, it is a more serious crime than assault.

At its most serious, Penal Code §69 resisting and exeutive officer can be charged as a felony. As such, it carries a maximum penalty of three (3) years in California state prison and/or a fine of up to $10,000.

What does California Penal Code §69 prohibit?

To be guilty under Penal Code §69, you must:

knowingly,
by means of actual violence or a threat of violence,
deter or prevent (or attempt to deter or prevent) an executive officer from performing any duty imposed upon such officer by law.


The definition of “executive officer” under Penal Code §69

An executive officer is a government official who may use his or her own
discretion in performing his or her job duties.
Examples of executive officers include:
Law enforcement officers (such as police, sheriff, United States Coast Guard, or California Highway Patrol),
Judges,
District attorneys,
Public defenders, and
Elected officials.
Public employees whose jobs do not require them to exercise discretion do not fall under Penal Code §69.
The definition of “violence” under Penal Code §69

For purposes of PC §69, “violence” does not require that an injury does or could result from the action or threat.

Merely touching someone in an offensive manner may be enough to constitute violence. It is the same standard as that used to define battery under California Penal Code §242.

However, in order for violence to be a PC §69 violation, it must actually deter or prevent an executive officer from doing his or her lawful duty.

Examples of violence under Penal Code §69 include (but are not limited to):

Slapping a police officer,
Tearing a judge's robe,
Touching an elected official's breasts, or
Violently ripping papers out of a district attorney's hands. 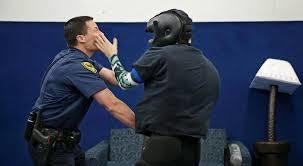 What constitutes a “threat” under California Penal Code §69?

To constitute resisting an executive officer, a threat must be one of violence. A threat to report the officer to his or her superior, or to bring a lawsuit against the officer, is insufficient.

Nor does the threat need to be of imminent or immediate harm. This distinguishes it from Penal Code 240 assault, in which the person making the threat must have the present ability to carry out a threat.

Examples of threats of violence under Penal Code §69 include:

“Me and my home boys are going to start killing you and your friends.”

A threat does not need to be made personally for you to violate Penal Code §69. A threat communicated via a third party is sufficient to support charges of resisting an executive officer.

California Penal Code §69 is a “wobbler” offense. This means it can be charged as either a felony or a misdemeanor.
As a misdemeanor, resisting an executive officer carries a possible sentence of up to one (1) year in county jail.

As a felony, Penal Code §69 can be punished by:

Your statement wasn't a threat of violence

Example: Julie is charged with felony possession of cocaine under California Health and Safety Code §11350. At her arraignment, the prosecutor asks the judge to sentence her to prison time, rather than California Prop. 36 drug diversion (treatment).

On her way out of the courtroom Julie looks at the prosecutor and says “Your career is over if it's the last thing I do.” The prosecutor understands that Julie is threatening her career, not her person. Complaining to the district attorney, the court, the media, etc. is legally protected speech that is not prohibited by Penal Code §69. Thus Julie has not committed a crime.

Your actions didn't deter anyone from doing his/her job

Example: Annabella is harassing patrons in a bar in Valencia, California. An officer from the Santa Clarita Police Department places Annabella under arrest for public intoxication (a “drunk and disorderly”) under California Penal Code Section 647(f).

Annabella smashes her fist against the bar and calls the officer by a racial slur. The officer cuffs her and places her under arrest. Because the officer wasn't deterred or prevented from doing his job, Annabella has not resisted an executive offer. However, she could still be charged with resisting arrest under California Penal Code §148(a)(1).

Example: Following a bench trial, a Los Angeles Superior Court judge finds Barney guilty of domestic battery under California Penal Code §243(e)(1). He sentences Barney to a year in county jail. When the judge pronounces the sentence, Barney threatens to “kick his ass” when he gets out of jail.

Since the trial was over when Barney made the statement, it wasn't for the purpose of preventing the judge from doing his job. Therefore, Barney is not guilty of resisting an executive officer under Penal Code §69. It is possible (though unlikely), however, that Barney has made a criminal threat under California Penal Code §422.

There are numerous reasons why a threat – or even violence – against an executive officer might not be made knowingly. They include (but are not limited to):

Example: Robin suffers from schizophrenia and substance abuse. One night, after taking some illegal drugs, Robin becomes delusional. He tries to enter a stranger's home to hide from secret agents he believes are out to get him.

The homeowner calls the police. They place Robin under arrest for trespassing in violation of California Penal Code §602(h)(1). Robin believes the secret government agents have found him. When the officers try to restrain him, he threatens to kill them if they don't let him go.

Robin has threatened the officers to try to deter them from doing their jobs. But because of his incapacity, Robin may not have known the police were executive officer. Therefore, he might not be not guilty of violating Penal Code §69.

The officer wasn't carrying out a lawful duty

Example: An LAPD officer suspects Joseph is engaged in the illegal cultivation of marijuana under California Health and Safety Code Section 11358. He enters Joseph's backyard without a search warrant. There is no reason for the officer to believe Joseph is committing a crime that can't wait for issuance of a warrant.

Joseph sees the officer in his backyard and threatens to shoot him if he doesn't leave. Since the officer had no legal right to enter Joseph's yard, Joseph's threats do not constitute resisting an executive officer.

An officer used excessive force while making an arrest

Example: After leading California Highway Patrol officers on a high-speed chase, Edwin finally stops his car. He jumps out and runs, and is tackled by an officer. He lies on the ground and places his hands behind his head. While he is lying there, a second officer arrives and begins kicking Edwin.

Edwin grabs the officer's leg and shouts that he is going to break it if he doesn't stop. Edwin may have violated some laws with the high-speed chase. He may also have resisted arrest. But because the officer who kicked him was using illegal, excessive force, Edwin didn't violate Penal Code §69 when he threatened to break the officer's leg.

Penal Code §240 is California's assault law. It defines “assault” as:

an unlawful attempt to violently injure another person,

when you actually have the ability to do so.

Penal Code §240 is usually a misdemeanor. It can be punished by:

But if the victim of the assault is a peace officer or other official, it can be punished by:

Penal Code §245 is California's law on assault with a deadly weapon or instrument (“ADW”).

For purposes of Penal Code §245, deadly weapons include (without limitation):

firearms,
knives and other sharps objects,
baseball bats and other heavy objects,
motor vehicles, and
even parts of the human body

If charged as a misdemeanor, California ADW carries a potential penalty of:

As a felony, California Penal Code §245 violations can be punished by:

the greatest applicable one of the following:

three (3), six (6), or nine (9) years in California state prison if the weapon is a semiautomatic firearm,, OR

three (3), four (4), or five (5) years in California state prison if a deadly weapon other than a firearm is used to assault a peace officer or firefighter engaged in the performance of his or her duties, OR

four (4), six (6), or eight (8) years in California state prison if a firearm is used to assault a peace officer or firefighter engaged in the performance of his or her duties, OR

six (6), nine (9) or twelve (12) years in California state prison if a machine gun or .50 BMG rifle is used to assault a peace officer or firefighter engaged in the performance of his or her duties.

Under California Penal Code §243, battery is defined as the willful and unlawful use of force or violence against another's person.

Penal Code §243 battery is usually a misdemeanor. It is punishable by:

Under certain circumstances, however, PC§243 battery can be charged as a felony. This usually occurs when the victim is either a medical professional providing emergency services outside a hospital or clinic, or a:

If charged as a felony, possible punishment under California Penal Code 243 battery includes:

You threaten to kill or cause great bodily injury to another person;

You make such the threat orally, in writing, or by electronic communication;

You intend that your statement be understood as a threat;

The threat is so clear, immediate, unconditional, and specific that it a serious intention to carry it out and the immediate prospect that you will do so;

The threat actually causes such other person to be in reasonable, sustained fear for his or her own safety or that of his or her immediate family.

These requirements can make a California Penal Code §422 charge difficult to prove. But it can be a useful charge to accept in a plea bargain, rather than some of the more serious charges set forth above.

Penal Code §422 is a California “wobbler” offense. If charged as a misdemeanor, it can be punished by up to one (1) year in county jail.

As a felony, making a criminal threat can be punished by 16 months, or two (2) or three (3) years in California state prison.

What can I do if I am charged with resisting an executive officer?
Resisting an executive officer under Penal Code §69 is a serious crime. It is important to retain an experienced California criminal defense lawyer as soon as possible to protect your rights. A skilled attorney may be able to help you:
Negotiate a lesser charge (plea bargain),
Reduce or eliminate your jail time and/or fine, or
Get the Penal Code §69 charges dismissed entirely.

The Kann California Defense Group has a strong track record of protecting the rights of clients accused of resisting an executive officer in Ventura, Santa Clarita, Los Angeles, Encino, Century City, Pasadena, and many other Southern California cities.
If you or someone you know has been charged with resisting an executive officer, resisting arrest, or any other criminal charge, don't hesitate to contact us.
Consultations are free and completely confidential. Call us today to find out how we can fight for you.

Every person who attempts, by means of any threat or violence, to deter or prevent an executive officer from performing any duty imposed upon such officer by law, or who knowingly resists, by the use of force or violence, such officer, in the performance of his duty, is punishable by a fine not exceeding ten thousand dollars ($10,000), or by imprisonment pursuant to subdivision (h) of Section 1170, or in a county jail not exceeding one year, or by both such fine and imprisonment.