Individual Tried to Create a Chemical Explosion Inside Oxnard Walmart 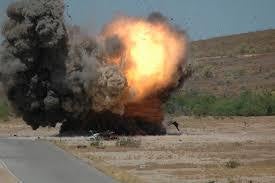 Oxnard police and fire departments are investigating an incident that occurred on June 18, 2016, at the Walmart on Saviers Road where someone tried to create an explosive mixture of chemicals[1] in the store. The police received word of a suspicious device in the store. After evacuating the building, police found a fish bowl filled with three different chemicals that had been obtained from within the store. An electrical device was put into the bowl that was intended to heat the chemicals to create an explosion. Hazmat crews tested the mixture and confirmed that the three chemicals had the potential to explode when combined.

Police and fire hazmat personnel conferred with the FBI and Sheriff's Bomb Squad by phone to determine if the device as constituted was explosive and were satisfied it was not. The store was searched aisle by aisle to make sure there were no other devices and none were found and by mid-afternoon the store was deemed safe.

Although the police are still investigating this matter, it is likely that the individual or individuals involved could be charged with possession of destructive device materials as well additional charges such as criminal threat under California Penal Code Section 422, if the person threatened to create an explosion inside the store.

In the state of California, Penal Code 18720 provides:

“Every person who possesses any substance, material, or any combination of substances or materials, with the intent to make any destructive device[2] or any explosive without first obtaining a valid permit to make that destructive device or explosive, is guilty of a felony, and is punishable by imprisonment pursuant to subdivision (h) of Section 1170 for two, three, or four years.”

Chemicals that can trigger explosives when mixed with other agents:
Fertilizer
Blasting caps
Gunpowder

If you were arrested or charged with the possession of materials to make a destructive device, it is important to contact a Ventura criminal defense attorney as soon as possible. Call our criminal defense team immediately for a free consultation to discuss your rights and to begin to build your defense. Contact the Kann California Defense Group today at 888-744-7730.