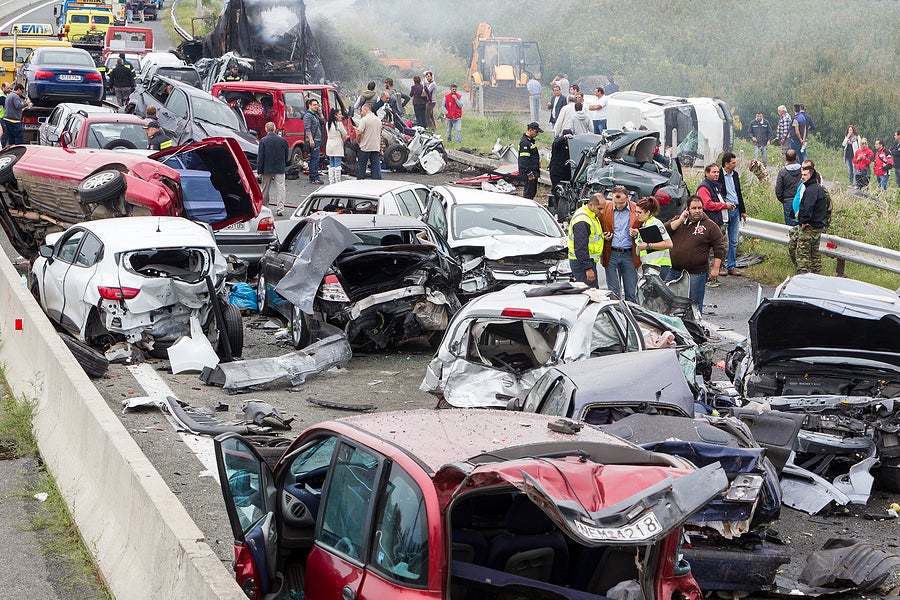 Recently KTLA 5 News reported that 20 people were involved in a multi-vehicle crash on the 10 Freeway in Baldwin Park. It appears that the initial collision was caused by a tow truck driver that could not stop in time to avoid hitting traffic ahead of him.

The California Highway Patrol reported that the tow truck initially crashed into a white Toyota Corolla and a gray Nissan Murano while attempting to swerve and avoid the collision. This initial crash caused a chain reaction that involved several other cars--the Murano crashed into the center divider and was then hit by a Dodge Ram and a white Lexus. The white Corolla was pushed into a blue Kia Nero, that hit a white Honda Odyssey, that hit a Honda CRV. The CRV crashed into a silver Corolla that hit another tow truck.

The massive accident resulted in several injuries to the 20 people involved and, tragically, a 13-year-old in the back of the Nissan Murano died in the crash. A major crash like this that caused many personal injuries and the wrongful death of a young teen will likely result in several legal claims against the driver responsible. Those injured can bring a personal injury claim for the damages and costs associated with their injuries, and the family that lost their young child can bring a wrongful death claim for their loss.

Vicarious Liability of an Employer

When a person brings a personal injury claim or a wrongful death claim, that claim is brought against the person or party that they believe is liable or responsible for their injuries or the wrongful death of a loved one. However, in some cases, that isn't just one person, but can be multiple parties.

In this case, the driver that allegedly caused the huge crash was driving a tow truck. This means that while the driver may be held liable for his own negligence, the driver's employer or owner of the tow truck company may also be held liable. This is called doctrine of Respondeat Superior, which makes employers vicariously responsible for their employee's actions.

If you have been injured in an accident caused by another party, or have lost a loved one in this type of accident, contact the experienced and compassionate Baldwin Park injury and wrongful death attorneys at the Kann California Law Group. We have experience handling personal injury and wrongful death cases that involve more than one party or employer liability and can help you bring the right claim against the right party or parties so you can get the financial recovery you are entitled to. Call us today for a free case consultation at 888-744-7730 or use our confidential online contact form and one of our attorneys will call you.