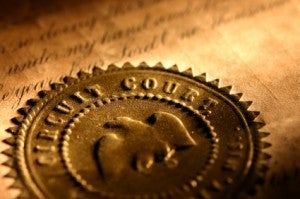 According to a report by KHTS, a 30-year-old Santa Clarita man who evaded police for months before being caught by deputies from the Sheriff's Station was sentenced on January 8. The Los Angeles County District Attorney's Office said the man, a Canyon Country resident, submitted a no contest plea to one count of criminal threats. He received a sentence of 32 months in state prison.

Law enforcement officials allege that the man was an active member of a gang and a serious criminal. He was wanted by police for several crimes, including felony gun possession and criminal threats.

Back in July 2013, deputies with the Sheriff's Station COBRA unit were attempting to confront the man at a traffic stop when he allegedly fled on foot. Police with a helicopter unit conducted an unsuccessful search of the area near Peachland and Lyons Avenue that lasted hours. COBRA unit deputies spent many months tracking him and eventually found him in Sacramento where he was staying with family. Area police officers conducted the arrest then deputies with the COBRA unit conducted his extradition.

Before the sentencing, the man spent time behind bars at Castaic's Pitchess Detention Center. His bail amount was set at $180,000.

According to California Penal Code 422 PC, you can be accused of committing criminal threats if you threaten to kill or physically harm someone while meeting the following three conditions:

A criminal threat charge is considered a wobbler, meaning it may be prosecuted as a misdemeanor or a felony. Although a misdemeanor is certainly more desirable, a conviction can still result in severe consequences such as a year in county jail. A felony can result in up to four years in a state prison. There are also fines, probation, and other penalties to consider.

Daniel E. Kann is a criminal defense attorney who genuinely cares about his clients' futures. From years of working hard in the field, he has gained an intimate knowledge of court proceedings and effective legal strategies. With him on your side, you'll have a fighting chance at a normal future. For a free, informative consultation, call (888) 744-7730.