The 34-year-old son of a Ventura County Supervisor has pleaded not guilty to several felony charges, including narcotic sales, conspiracy, money laundering, and burglary. 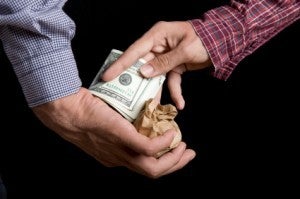 According to the Ventura County Combined Narcotic Task Force, an anonymous tip that the supervisor's son was selling narcotics in Ventura County led to an investigation last November. In February 2013, a parcel from Lexington, Kentucky that was bound for the accused was seized. Police allege that it contained $13,000.

Further investigation into the man's bank account and a subsequent raid on a house in Lexington led to the accusation that he sold and shipped Oxycodone pills to Kentucky in exchange for nearly $300,000 during the past several years. The Ventura County Sheriff's Department claims that the arrest was delayed due to complicated issues in the case involving alleged interstate narcotics sales and cash transfers.

According to the Moorpark Acorn, the accused was placed on three years formal probation in July for manufacturing and selling human growth hormone. A spokesman for the Ventura County Sheriff's Department told the Acorn that the probation may enhance any sentence the suspect might receive if he is convicted on any of the charges.

Investigators have also been looking into whether the accused may have been involved in other drug transactions within Ventura County.

California Health and Safety Code 11352 prohibits the sales/transportation of controlled substances. That includes moving the controlled substance(s) from one place to another, regardless of quantity. It also prohibits exchanging the narcotics for money, goods, services, or other benefits.

If convicted of this offense, the suspect could face up to three, four, or five years in state prison, and be levied a $20,000 fine. However, if convicted for moving controlled substances across more than two county lines, a person can be looking at a three-, six-, or nine-year sentence along with the potential maximum fine.

Obviously, defending yourself against a drug charge of any kind is a serious business that requires the services of a serious and experienced criminal defense team. The attorneys at The Law Offices of Daniel E. Kann in Ventura understand what it takes to get you the best possible outcome in your case. Call (888) 744-7730 or contact us online to discuss your case today.