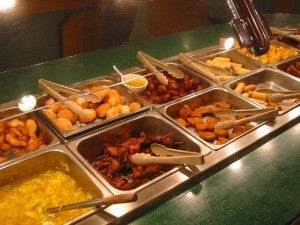 All of us who have traveled to a foreign place have surely had the experience of encountering a cultural custom that seems completely bizarre but is perfectly normal to the locals. It's easy to forget that normality is a relative concept. Although we would like to think that the United States is at the center of the world, the truth is we are just another land with a number of customs we take for granted that strike visitors as alien and perhaps even absurd.

It's true, Americans love abundance. The words “free refill” and “endless buffet” are part of our daily lexicon. When we go out to eat, we expect a hefty portion of food served on plates bigger than our heads. And why not? More is better after all. However, non-Americans tend to express shock and awe when they sit down for their first American meal. Sure, our portion sizes may be excessive, but is not excess the spice of life? Give us seconds, please!

Most Americans know that if you don't tip for services, then you're probably a jerk. However, tipping is not a customary practice in most other countries, and it's one of the first things visitors notice about our country that is quite different. So, why is it that we tip? It may be that waiters and other service workers in the U.S. receive wages that leave them wanting, so to speak. For them, tips are less of a luxury and more of a necessity. So, remember this next time you're contemplating giving your waiter short shrift. Be kind, leave 15-20 percent!

According to non-Americans, our breed of patriotism may be just a wee bit over the top. It's true that the stars and stripes can be found just about anywhere and all of us can probably recite the pledge of allegiance off the top of our heads. But that does not necessarily mean we're more nationalistic than others; love of country is universal. We're just louder about it!

There are only three countries in the world that don't use the internationally agreed upon metric system: Burma, Liberia, and the U.S. This annoys mathematicians, engineers, and other technical workers in the rest of the world to no end. It's because conversions between units of the metric system and those of our antiquated system of weights and measures are needlessly complicated. Yet we remain hesitant to convert fully to the metric system, probably because the shift could prove very costly and time-consuming.

Americans have an insatiable sweet tooth, so it seems. Visitors are always surprised to discover how sugary a lot of our food products are, even ones that don't call for sweetness, such as bread. We just don't notice it because sugar has been so thoroughly incorporated into our diets that we might as well eat a handful of marshmallows with every meal. The dental industry certainly isn't complaining.

What other strange American customs have your foreign pals pointed out to you? Let us know on our Facebook page.