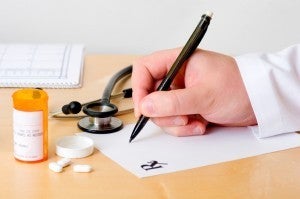 Ventura County detectives have arrested a Camarillo doctor after accusing him of writing prescriptions for controlled substances without a legitimate medical purpose. The suspect was also accused of practicing medicine without a license.

According to The Ventura County Star, the arrest occurred after a two-month investigation spearheaded by the Ventura Interagency Pharmaceutical Crimes Unit and the California Medical Board. Investigators said that several of the doctor's patients had been arrested on suspicion of selling drugs that had been prescribed to them. Detectives allege that the accused wrote hundreds of prescriptions for drugs, such as methadone, codeine, hydrocodone, and Xanex.

Investigators have also accused the doctor of not adequately examining patients to determine if it was medically necessary for the patients to receive the prescriptions. As of the last report by the VC Star, the suspect was being held in Ventura County on $50,000 bail.

Under California Health & Safety Code 11153, it is illegal for a doctor to write a prescription without a legitimate medical purpose. Conversely, California Health & Safety Code 11173 states that it is illegal for patients to “doctor shop” — in other words, to seek multiple doctors in order to receive multiple prescriptions for controlled substances through fraud, deceit, concealment, and misrepresentation.

Penalties for both Health and Safety Codes 11173 and 11153 are serious and can be charged as felonies or misdemeanors. Doctor shopping can potentially lead to a sentence of up to three years in California State Prison. If convicted of illegally writing prescriptions, a doctor can face up to a year in state or county jail, a $20,000 fine, and the loss of a medical license.

If you have been accused of doctor shopping or illegally writing prescriptions, a defense attorney at The Law Office of Daniel E. Kann realize that these charges can seriously impact your reputation and your future. Our experienced legal team is dedicated to fighting for your legal rights and to seeing that you get the best possible outcome for your case. Please call us at (888) 744-7730 or contact us online today if you need answers concerning your legal questions.