Capital One Says It Can Visit You at Home or Work, But WILL They? 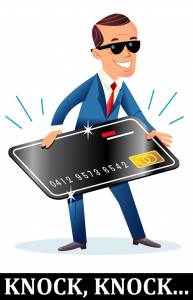 Homeowner: Capital One, as in my mortgage company?

Visitor: Yup! Open up. After all, you DID agree to this…

While a scenario like this isn't likely to happen, it still could happen, at least according to a recent contract update sent by Capital One to its customers. According to the updated contract, Capital One may contact you in a manner in which it chooses. However, in addition to the usual telephone call, written letter, or email, Capital One may now also contact you via a “personal visit” at your home or workplace, prompting a lot of customers to cry foul. Capital One has responded to the buzz surrounding this new found contract update, insisting that it's not a new rule, and that a personal visit wouldn't apply to the vast majority of its customers. However, many people are still calling into question the legalities surrounding these visits.

Santa Clarita defense attorney Dan Kann was asked for his opinion on the matter by The Los Angeles Times. According to Kann, “It sounds really invasive, but I don't think it's a violation of your 4th Amendment rights.” Kann went on to explain that the 4th Amendment protects citizens from searches and seizures by law enforcement and the government, not private citizens. Under this scenario, Capital One would be considered a private citizen, and therefore permitted (via contract) to conduct personal visits.

While a violation of search and seizure rights seems to be out of the question for Capital One, Kann did hypothesize that laws against harassment and stalking could factor in given individual circumstance, and that Capital One could find itself held accountable of violating such laws if it took the “personal visit” clause to heart and, for example, invited itself over for dinner or started to hang out at your office.

What do you think about Capital One and the “personal visits” it's permitted to make? New rule or not, does this level of personal interaction between Capital One and its clients seem to cross the line just a little too far? Let us know in the comments below. And for more information about illegal search and seizure and your rights, please visit our website.

To learn more about your rights concerning Capital One's policies, view the below video from attorney Dan Kann.