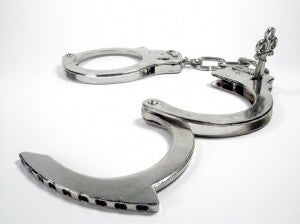 A 32-year-old man is in Ventura County Jail after he allegedly led officers on a foot chase that ended in a scuffle and allegations that the suspect tried to take one of the officer's firearms during the melee.

The incident began when police were called after receiving a tip that the suspect, wanted on an outstanding warrant, was walking in the 2500 block of Johnson Drive in Ventura. Police did not find him there, but did find him later when they received reports of a suspicious person loitering outside of a business on Ventura Boulevard.

The suspect was walking away from the scene when officers approached and ordered him to stop. He didn't and led the officers on a foot chase. Eventually officers called for backup caught him and a scuffle ensued. According to The Ventura County Star, a Taser was used on him to no effect and during the struggle, the man tried to grab an officer's gun.

After the suspect was struck with a baton, the fight ended. He was taken into custody and charged on suspicion of resisting arrest and reaching for an officer's firearm.

While California Penal Code 148(a)(1) covers resisting arrest charges, the law covers much more ground than that and includes delaying or obstructing any public officer, peace officer, or emergency medical technician trying to perform his or her duty. If prosecuted on those charges alone, a person can face up to one year in county jail and a $1,000 fine.

The experienced criminal defense attorneys at The Law Offices of Daniel E. Kann believe that everybody is entitled to excellent legal representation. If you are looking for a knowledgeable and committed legal team dedicated to protecting your rights, call our Ventura office at (805) 290-4932. We can also be contacted online.