Is a Swiss Army Knife a Weapon? 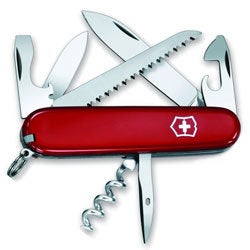 In June of 2016, the California Supreme Court[1] affirmed a lower court ruling which held that a common slipjoint folding knife, in this case specifically a “Swiss Army Knife,” was not a “dirk or dagger,” prohibited when carried in the open position and concealed, under California law.  The case arose from a 2012 arrest of a man in San Diego, California, after a traffic stop.  Mr. Castillolopez was a passenger in the vehicle, who was found to be in possession of a Swiss Army Knife, which was being carried in a jacket pocket, with the blade in the open position.  Mr. Castillolopez was not cited or charged with any other crime other than possession of a Dirk or Dagger, the concealment of which can be a misdemeanor or a felony under California law.

Section 16470[2] of the California Penal Code states that: “a non-locking folding knife” or “a pocket knife” can be used as a stabbing weapon “only if the blade of the knife is exposed and locked into position.” This means that you may carry a folding pocket knife or utility knife if it closed or if the blade cannot be locked.

Straight knives and folding knives that are open and locked may be worn under California's open carry knife law in accordance with Section 20200[3] of the Penal Code if they are 1) carried in a sheath and 2) the sheath is worn openly suspended from your waist.

California Penal Code Section 21310 states that " any person in this state who carries concealed upon the person any dirk or dagger is punishable by imprisonment in a county jail not exceeding one year or imprisonment pursuant to subdivision (h) of Section 1170."

If you were arrested or charged with possession of a knife or other type of weapon such as a firearm, it is important to contact a Santa Clarita criminal defense attorney as soon as possible. Call our criminal defense team immediately for a free consultation to discuss your rights and to begin to build your defense. Contact the Kann California Defense Group today at 888-744-7730.