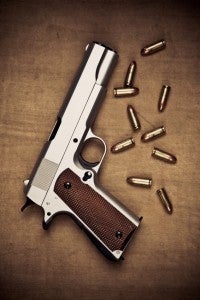 An Oxnard man was arrested[1] on suspicion of carrying a loaded semi-automatic handgun Friday, June 3, 2016, according to the Oxnard Police Department. The 37-year-old man was arrested around 10 p.m. in Beck Park on 600 West Kamala Street after authorities searched his backpack. Police noticed the suspect in the park allegedly drinking alcohol and he was arrested on suspicion of carrying an open container. Police later searched the man's backpack where they found the gun.

California laws regarding gun possession and use are numerous and can be complicated to understand even though they seem straightforward. It is best to speak to a skilled California criminal defense attorney who can explain all of the intricacies of who can own a gun and where you can carry your gun within the state including:

If you are arrested or charged with a gun or ammunition violation, you need to contact an experienced Oxnard criminal defense attorney right away. If you are convicted of a misdemeanor weapons charge, you can get up to a year in jail or you could be required to pay a fine of as much as $1000 rather than a jail term. For a felony charge, you will most likely get a prison sentence. You can get a penalty from one year to 20 years in prison in this state. This depends on the exact offense, your criminal record and the general circumstances regarding the crime. Contact the Kann California Defense Group today for a free consultation and to discuss how we can defend you. Call our toll-free number 888-744-7730 today.